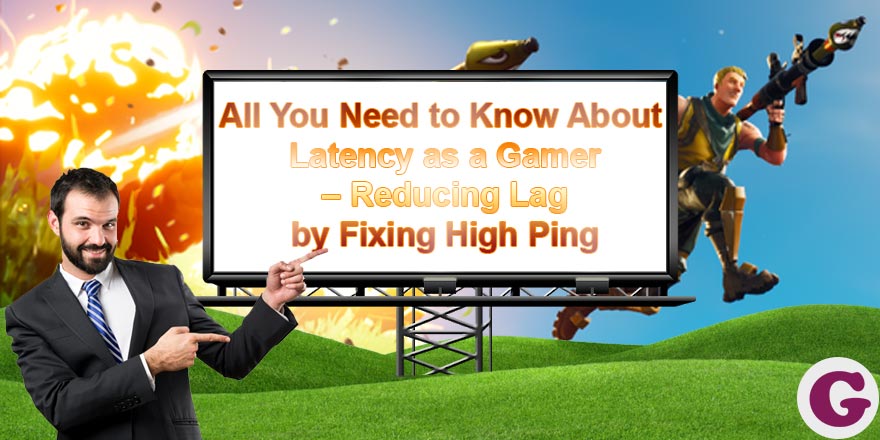 When it comes to online gaming there’s nothing worse than having a high ping. You make a move, take a shot or cast an ability and the game isn’t immediately responding to it. You’re experiencing a delay that ruins the gaming experience in one way or another. But don’t worry, in this article we’re telling you all about the things you need to know about ping – what it is and how to reduce it.

What Is Ping in Gaming?

Often used somewhat synonymously to lag and latency, ping is a signal that travels from your computer to the game server and then back again. It’s used as a way to measure how quickly data is fetched, which affects your experience of the game you’re playing.

If the data is fetched quickly the movement will appear to be happening in the same instance as you’re pressing the key. On the other hand, if it’s fetched slowly you will experience a delay and probably get mad at the game because it’s lagging.

The Difference Between Ping, Lag and Latency

What Is a Good Ping for Gaming?

It’s obviously advantageous to have as low of a ping time as possible as any latency means a delay. However, any ping of 50ms or under that is considered to be a good ping for gaming. You will not experience any noticeable lag with this. You may even be fine with a ping of 75ms.

When the ping goes beyond 100ms is when things start getting ugly and if you reach 200ms or 300ms latency most people would consider the game to be unplayable.

Six Reasons to Why Your Gaming Ping Is High

With online gaming being a massive worldwide activity that is growing in developing countries, one of the most asked questions about it is why is my ping high. While there isn’t one true answer to this, we have listed five possible reasons below:

1. Your internet connection from your ISP is bad

When ordering an internet service most of us only look at the download speed and neglect the upload. However, when it comes to online gaming the upload speed is actually what matters the most if you want to reduce your ping.

2. You are using a wireless connection

3. You are playing on a server far away from you

The further away your computer is from the game server the longer the signal sent from your computer to the server has to travel, which means higher ping. If you’re living in India you cannot expect a good gaming ping if you play on a server hosted in USA and vice versa.

4. You are downloading or watching streams

If you don’t have a good enough internet connection this can make your ping sky-rocket as any data that is downloaded or uploaded will affect you.

5. There are many users on your network

If you are sharing your internet connection with several other users this may be the reason why your ping is so bad. Unless they are downloading or streaming it’s unlikely to be the cause, but don’t count it out.

6. Your modem is old and crappy

Most modems shouldn’t affect your ping in such a negative way that you feel like you have to reduce lag that is happening when you’re gaming. However, an old modem could still be the cause. This is especially true if you’re on a wireless connection. Then you might need a good gaming router.

The solution to the problem does of course depend on why your ping is bad to begin with. However, based on the above reasons, the following will reduce your latency when gaming:

In addition to the above solutions that are most likely to fix your problem with high ping, there are a couple of console specific tricks that you could try to make your ping good. Let’s have a look!

How to Lower Ping on Xbox One

How to Lower Ping on PS4

If the DNS code doesn’t work for your country (which it may not) or didn’t reduce latency, try the following ones:

How to Lower Ping on Nintendo Switch

The most crucial step in lowering your ping on Nintendo Switch is purchasing a LAN-cable adapter so that you don’t have to play wirelessly. It’s simply an adapter that has a USB connection on end and an Ethernet connection on the other.

If this isn’t enough to reduce latency for you, the above DNS codes that we listed for PS4 also works well for Nintendo Switch. You can enter these by going to:

That’s it. You can now enter the above listed DNS codes.

Eliminating Latency – How to Get 0 Ping

As a fan of Fortnite you have probably heard of players getting 0 ping and you might have tried getting it yourself through youtube videos. Before explaining to you how to get 0 ping, let us make it clear that almost no one is playing Fortnite with zero latency.

You see, the only way that you’re able to get a non-existent ping is if data is fetched immediately to you from the server and the only way this is possible is if you are the server. In other words, to get 0 ping you need to be the host of the server that people are playing on.

It is of course possible to set up a server yourself to make this happen in games that support it, but it’s a lot of work. In terms of players showcasing their 0 ping experience in Fortnite, this is nothing but the interface of the game showing such a value which obviously is an incorrect one.

Finding Out Your Ping in Games

Per default, only a few games will show your latency on the interface, but almost all have made it possible for you to easily display it. Below we have listed how it’s done in some of the most popular games:

How to Show Ping in Fortnite

How to Show Ping in League of Legends

How to Show Ping in Dota 2

How to Show Ping in CS:GO

How to see ping in fortnite?

Turn on net debug stats which are found in the settings menu after joining a game.

Why is my ping so bad?

There can be many reasons, but the most common ones include a weak Wi-Fi signal; too poor of an internet connection; too many activities using your internet and playing on a game server that is too far away from you. For a full list of reasons and the solution to reducing your latency, click here.

How to lower my ping?

It depends on why it’s high. Common solutions include playing with an Ethernet cable instead of playing wirelessly; upgrading your internet; stop downloading and choosing a game server close to you.

What is the difference between latency and ping?

In everyday speech they are used synonymously with each other. However, in reality ping is a tool (a signal) that measures the time that it takes to fetch data from a server while latency is the actual time.